RSS Feed
← EPFH GIVEAWAY – And the winners are…..
Friday Five – Quotes That Challenge & Inspire Me → 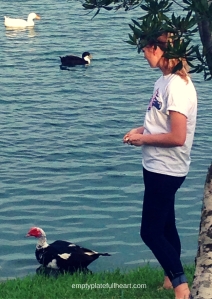 We live on a retention pond with ducks and fish and turtles bobbing their little heads up out of the water. We have water fountains. It’s peaceful. The sun rises over it. It’s quite beautiful. We call it our lake. But alas, it’s a retention pond.

I grew up camping with my family. We fished a lot. I can remember my dad, all of us really, saying “Here, fishy fishy!” as we begged them to bite.

On our “lake”, we occasionally see people trying to fish in it. I think “trying” is a key word here. I have never seen anyone pull anything out of it. There must be something worth catching in there but we’ve never tried. When our grandson is old enough to cast a line we’ll get him a Mickey Mouse fishing pole and fish with him.

The other day there was a young man fishing. His method puzzled me. He stood in one place and quickly cast his line 2-3 times, reeled it in quickly and moved about 10 feet over. He repeated his casting method and caught nothing. He made his way around the entire lake and you guessed it, he caught nothing.

It made me think about Jesus being the ultimate fisher of man. I’m so thankful He doesn’t cast quickly, reel it in and move on when we don’t bite. He is patient. He waits for me. He is always right where I need him to be. He will keep casting until I bite.

This past Sunday, Dr. Ed Young, Pastor of Second Houston, used Michelangelo’s painting, Creation of Adam, as a message illustration. He pointed out that God was completely stretched out, body fully extended, trying to reach Adam, so much so that his muscles were taught and he was holding on to the others in the picture for leverage. Adam? He was chillin’. Laid back. Arrogant. As if he was saying, “Come to me, God.” If I look at it too long, it starts to make me angry at Adam. All he had to do to touch God, to touch the Creator and life-giver of the universe, to touch the One who formed Him from dust, to touch the God who gave him everything he could want or need, was extend his finger just a little, or bend his wrist just a little, or sit up just a little. Just a little. … I’m reminded of an old commercial for hair gel, “A little dab ‘ll do ya’.” I digress…

Then I’m brutally reminded… I am just like Adam.

So often I whine about God not seeming near or present or anywhere. So often I’m too chill. Lazy. Even arrogant. So often, even in my striving to be near to God, I give up just before contact is made. Who do I think I am? Who do I think He is??

God is right there. So very close. He gives us a choice. To touch him. To be caught.

Writer+Proofreader+Traveler+Foodie+Dreamer. Let's walk and work together.
View all posts by Andrea »
← EPFH GIVEAWAY – And the winners are…..
Friday Five – Quotes That Challenge & Inspire Me →