RSS Feed
← Reaping the Rewards of the Climb
Five boundaries with a side of grace, please. →

Moments We Never Forget – A Guest Post by Kelly Nickerson

I couldn’t be more humbled and honored to share this story of love, faith, loss, hope and miracles from Kelly Nickerson. Kelly is a new friend and I’m so happy to have her over at EPFH. Be sure to check out more of Kelly’s writing at KellyNickerson.com. She graciously welcomes us on her journey and shares from her heart to yours – and mine. Kelly, you are most welcome here anytime! 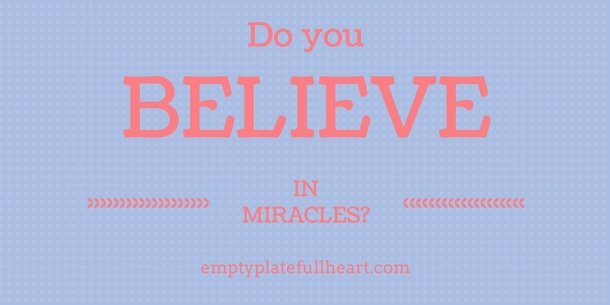 Do you believe in miracles?  I used to believe that miracles were only something that happened in the bible, that is until G-d showed me first hand.

After the death of my eldest daughter Aurora, my heart had shattered.  She had taught me it was better to have loved and lost, than to never have loved at all. So when I became pregnant again…

We went in to the doctor office for the ultrasound to check on our baby.  I had a sense that something was wrong once again. With my husband by my side, we eagerly waited to hear, all is well.  Instead the same reaction from the tech as before, no kidneys.

My husband and I collapsed into each others arms. I howled.

Then the doctor offered an experimental treatment, but it could be life threatening. I didn’t bat an eyelash. “Yes! Anything for my child.”

Thus began amnio infusions.  The doctor would inject my belly with saline and, “fill her up!”, as he always used to say. It was painful, as I had to hold still for up to an hour while they did the procedure. It was worth it.

We found out we were having a boy! We decided to name him Elijah Praise.  Elijah means: the Lord is my G-d.  Praise, was so that we would remember to always praise G-d every day for the wonder of his life.

Everything was done by ultrasound, since it was important to find the placement of the needle.  It was crazy seeing so early in the pregnancy how he reacted to the saline. It was cooler, so he would always back away from it, and as he acclimated to the temperature, he would begin to swallow the saline and wiggle around!

Soon he got used to the treatments.  As he used more of the saline, the more often we had to go in.  He went from being tightly bound from lack of fluid, to stretching and even playing with the needle. In the end there were around twenty infusions!

We fell in love with him and watched in awe as he grew.  We continued to pray and had others pray for us.

Elijah Praise was born alive on September 30th, 2004 crying like a bleating sheep. He was gorgeous.  They whisked him away to the NICU. G-d had answered our prayers that his lungs would be developed, but now we had to pray about his missing kidneys.

We had to make decisions fast. He could easily go septic, so we decided to go forward with peritoneal dialysis.  I was a mess after 32 weeks of strict bed rest, but we trusted him to G-d. We had prayer warriors waiting for our calls, (FB was not around yet) to see what He would do next.

Each day was a roller coaster.  More times than not, they said he was going to pass away.  But G-d…..

He ended up becoming the miracle that the whole NICU, hospital, and even our mega church was buzzing about.  The hospital staff and others were enamored to see the baby with no kidneys. Word got out and even Good Morning America wanted to share his story.

My husband and I lived each day like it was his last.  We rarely left his side. We had one doctor that actually told us to go home and live our lives.  We looked at him and said, “He is our life.”

Eli was amazingly laid back (he gets that from his Daddy).  He rarely cried, even though he was going through more than I think we still can comprehend.  He would gaze at us with his steel gray blue eyes and his double dimpled smile.  He was so little and captivating.

We soaked in every movement and milestone with gratefulness. He knew pain, hunger, and so much more. Yet he continued to smile, grow, and live.  Yes, he made each day an adventure.

We prayed over him and put up bible verses all over his crib and watched him grow.  We finally graduated out of the NICU and were sent up to the regular floor.  My husband and I moved into his room in the hospital tower.

At his sickest he would look up and to the right, even though no one was standing there.  After reading several other books about children and angels, we can’t help but wonder if we were entertaining angels unaware…

Heaven was rallying for this little guy.

At one point he had a massive stroke, he was on a ventilator and we were moved to the PICU.  The CT scan revealed that his brain was nearly dead.  The doctor who rarely showed emotion, cried. They told us to prepare our goodbyes.  A friend of ours came up and said, “It’s time to lay him on the alter. He is G-d’s now.”

I was petrified, but I knew he was right.  We prayed and entrusted that anything was possible with G-d.  A few days later they decided to take him off of the vent.  If he didn’t breathe on his own, it was all over.  If he did, they had said he would be a vegetable and have no perception of who we were and would be blind.

The room looked like a bible had exploded. Verses were hung on the wall and we had everyone praying, we wouldn’t take no for an answer.

With a room full of doctors, they pulled the ventilator out, and waited.

Elijah opened his eyes, turned to the right and looked right at me. He gave me a smile with that steroid puffed face of his and cooed.  The whole room went wild with cheering. Everyone was crying. It was TRUE miracle!! 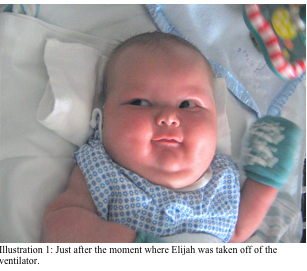 As we got ready to leave, we had several staff members come up to us and say, they never thought he would make it.

Our small apartment was overrun by medical supplies and we learned how to give him dialysis at home.  For two months we gave him shots, feedings, medications, and bandage changes. Our whole life revolved around him. We were grateful for every moment.

At his 6 ½ month checkup, he was approved for his kidney transplant.  I should have been thrilled, but I had no peace.

Eli was rushed to the hospital the next day by ambulance. We returned to the place where we had seen him be revived, only to have to let him go. As we stood there in shock, family and friends began to pour in.  I started to sing Amazing Grace, and by the end everyone, including the staff were singing.

We grieved hard.  We buried him holding his big sister Aurora’s ashes. They were together and that gave me some comfort.

I wanted to share about Elijah to tell of the wonder that is G-d. Learning to live without our children has been one of the hardest things we have ever faced. Yet, I cannot look back on their lives and not see G-d’s fingerprints everywhere.  Each precious life has a purpose, no matter how long they are placed on this earth.

My frame was not hidden from you when I was made in the secret place, when I was woven together in the depths of the earth.

Your eyes saw my unformed body; all the days ordained for me were written in your book before one of them came to be.

His life wasn’t a mistake. G-d knew how long he would live and what he would accomplish long before one day came to be.  He had purpose. We learned how to pray with faith. Others became the hands and feet of Christ as they helped our every need. Our faith was solidified in seeing what He had done through our son.

Some might say, “but he died”.  He went through all of that but didn’t survive.

What we saw was the confirmation that G-d does exist and that He does answer prayer.  We also learned that sometimes he provides a miracle to give you strength to remember through the hard times, He is still there. Death is a part of life, we can’t escape it…

We didn’t just see one miracle, we saw many and that is something permanently branded on our souls. Most would say that the heartache wasn’t worth it, but I beg to differ.

Eli’s life taught us about faith, prayer, and unconditional love.  I am so thankful to be his Mama.  He touched so many lives during his short stay on earth.  While I miss him and his sister every day, I know that we WILL be together again.  Until that glorious day comes, I know that I held a piece of heaven…

Kelly Nickerson is a homeschooling mama with two beautiful kids under her wing and four dancing in heaven. She also lives with her amazing husband, who supports her like no other. Kelly is a firecracker prayer warrior who shares honestly about her brokenness, while praising and clinging to the G-d who sustains her. When she isn’t hunting down germs with disinfectant, you can find her writing of her adventures at kellynickerson.com.

Writer+Proofreader+Traveler+Foodie+Dreamer. Let's walk and work together.
View all posts by Andrea »
← Reaping the Rewards of the Climb
Five boundaries with a side of grace, please. →