Five Significant Birth Stories in the Bible +1 of Personal Significance

Most of us love a good birth story, especially those who have given birth. We moms could go on and on and on and on about our pregnancies and labor and delivery stories. Today is our son’s 23rd birthday. His birth story is one of top three favorites. (I have three kids.) His birth story was quite eventful and unique – as they all are. I’d like to tell you about it and I’m also going to include a few of my favorite birth stories from the Bible. Join me as I link up with Mrs. Disciple and other bloggers who are recounting their favorite bible stories.

Jakeb
Our son was the first boy to be born to my side of the family in over 43 years. He “broke the mold”, as they say, and came out boy and red-headed. Red hair… be still my heart. The last boy born into our family was my Uncle Ronnie, my Dad’s youngest brother. Since my Uncle Ronnie, our family’s quiver would become filled with the birth of girls, including me and my 4 sisters. I was raised with sisters and loved on a host of nieces then continued the parade of girls with a daughter of our own. When Jakeb was born, I held him with awe and wonder and said to myself, “What in the world do I do with him?” 23 years later, it seems as if we worked it out quite well.

The pregnancy was coming to term and he needed to come out. Those of you who have had babies know exactly what I mean. My husband was about to begin working 24/7 for a month long shut down and the chemical plant he worked for and it would be challenging for him to get away for the birth. Labor began slowly but I thought it might be time to head to the hospital. We got in our Buick Regal that we affectionately called “McBuick” (we ate a lot of McDonald’s back in the day unfortunately) and were pulling out of our driveway when a UPS truck rounded the curve where our house sat. There was a quick and thorough “thump thump” as he ran over our neighbor’s dog. Well… what do we do about this??? I went to one neighbor with both hands holding my contracting baby belly to tell her that her dog had just been run over while Tommy went to another neighbor to see if they could help her clean it up. We got back in our car and headed to the hospital to meet our 8lb 3oz redhead who immediately stole our hearts. We knew this boy would be an adventure. And he has been. He is everything adventurous wrapped in human form. Happy birthday, Jakeb! It is such a blessing to get to be your “mama”!

As I was organizing my thoughts for this post it occurred to me that I’m writing about the birth stories of only boys. I’m in no way discounting the birth of girls because we all know the girls are pretty crucial in a birth story, but boys are traditionally and historically sacred in a family as they carry the family lineage. In the scriptures, the first male son, or any son really, was of significant consequence. So much of a family’s future would ride on the males of the family.

In honor of the #FridayFive link up and our awesome son’s birthday, here is a brief telling of five significant birth stories from the bible. I hope you’ll click on the scripture passages and read more. They are such intriguing stories. There is so much more that I’d love to add but I’m not sure the internet is big enough. As with any good story, there is always something left to the imagination. 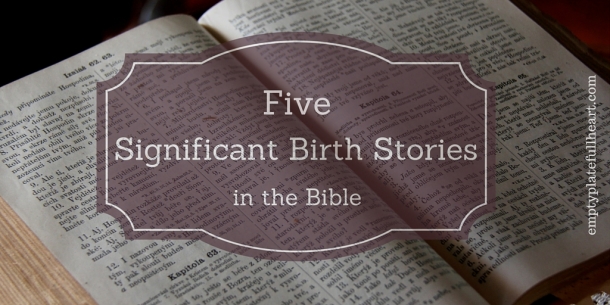 Cain was the firstborn male of the first created humans. What an honor that was – or should have been. There’s not much said about his actual birth but his story would have sovereign significance. Adam and Eve also had Abel. Abel kept flocks and Cain worked the soil. Cain became jealous of his brother and ended up killing him. Then there was Seth who is not really spoken of much except that he was a replacement for Abel since he had been murdered by Cain (Genesis 4:25). There were likely other female children because babies were made somehow but, like I said above, as with any good story, much can be left to the imagination. Read the account of Cain in Genesis 4.

Isaac was born to Sarah and Abraham. He was Abraham’s second son, Sarah’s first. The story is quite scandalous actually, as many bible stories are. Isaac would be prepared as a sacrifice offering by his father, Abraham. God would bless Abraham’s obedience and spare Isaac by providing an unblemished lamb to sacrifice in his place just in the knick of time. His half-brother, Ishmael, would eventually be asked to leave with his mother, Sarah’s former handmaiden, Hagar. Two nations would come from these two boys. Christianity was born through Isaac. Read about the story of Isaac in Genesis 21.

Moses, he was the baby whom his mom sent down the river in a basket. Who does this? She did this to protect him from Pharoah since he was killing all Hebrew males. He was found by a loving Egyptian woman, the daughter of Pharoah. Moses would be raised as an Egyptian but in God’s faithful provision, his mom actually got to be the one to nurse him and she got paid for it! He had some road bumps along the way, made some mistakes which required grace but he would ultimately fulfill God’s plan for his life as the one who helped free his people, the Israelites, from slavery. Read the account of Moses’ birth here in Exodus 2.

John the Baptist prepared the way for his cousin Jesus, the Messiah. Elizabeth, the cousin of Mary became pregnant with John just before Mary became pregnant with Jesus. They spent time together during their pregnancies. Elizabeth seemingly being too old to become pregnant and Mary  being too young and unmarried to be pregnant. Elizabeth’s husband, Zechariah, wasn’t able to speak during the pregnancy because he didn’t believe what the angel told him about the birth of their son, John. When Zechariah spoke again, it was to proclaim the name of his son – John. No one understood why they would name him John since this was not a family name. They wondered what he would become. They would find out soon enough. You can read about the birth of John the Baptist in Luke 1.

Jesus
You can read about the birth of Jesus in Luke 2 but I’m going to let this spoken word piece by Jimmy Needham tell you about it here. Now, this… this is a story.

These birth stories and more like them are so rich and full. Full of meaning, wonder and hope for our present and our future. When I hear of a new baby having been born I  think that God must not be finished with us yet. His plan for us not yet fulfilled. Our son’s birth and the births of our other two children have major significance in our earthly family but they, along with the other births I’ve mentioned, have eternal significance in God’s family. Our birth stories weave together a wonderful tapestry of God’s love and grace for us – even if, and especially when, the stories get messy.

Share your story with us in the comments or over on the EPFH Facebook page if that’s easier for you. We love a good birth story!

This @FridayFive is brought to you by Mrs. Disciple’s Friday Five Link Up over at Mrs. Disciple . Go check out Kelly’s motivational post, Time-Tested Bible Stories for the Modern Day Disciple, and visit a few others who have linked up. Be sure to leave some comments. Bloggers love feedback! Share with us your story with us.

Writer+Proofreader+Traveler+Foodie+Dreamer. Let's walk and work together.
View all posts by Andrea »
← My Passport Beckons
4 Things You Need To Say “ummm… no” To This Easter →