A Different Kind of Happy: Musings on Our 28th Anniversary

As I watched the video I put together of our “life so far” eight years ago for our 20th anniversary, a flood of emotions made their way to my eyes and gently trickled down my cheeks. It wasn’t like other times, though. This time the 3 minutes and 26 second photo journal concluded with a deep inhale of relief rather than exhales of grief.

Maybe this sounds a little melodramatic to you but if you’ve been married for any length of time, you know two things: 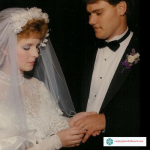 Today is our 28th anniversary. This day is different than that one 28 years ago when two mere babes with pockets full of hopes and dreams of marital bliss placed on each other’s hands rings which symbolized eternal unity. We thought we had a good handle on what we were doing and how we would face our days and years to come. We would face it all together. Hand in hand. Heart to heart. And we would be happy. This has to be where the term “young and dumb” comes from. Or at least it fits in our case. Perhaps, however, young and dumb isn’t all bad for if we had known all we would face over the next 28 years, there is a really good chance we wouldn’t have made it to the alter.

Well, as life would have it, lacking the bliss and in spite of our ignorance, we would crawl out of the trenches of our first 5 years with a couple of awesome kiddos, some fun times and a few scrapes and scars. Then year by year, day by day and sometimes hour by hour we would experience immeasurable joys like adding another kiddo, along with the heartbreaks and at times, confounding pain and grief – and we would hang on. Together.

“We went dancing in the minefields
We went sailing in the storm
And it was harder than we dreamed
But I believe that’s what the promise is for.”
~Andrew Peterson, Dancing in the Minefields

The thoughts of happiness that we had conjured up in our very young and underdeveloped hearts on that first day of our lives together have shifted like sand in a storm and been tossed about like fall leaves. There have been anniversaries that we tolerated and ones we celebrated. There have been some anniversaries marked by tears and some by rejoicing and some with a mixture of both. I must say that the ones we’ve tolerated and shed tears over are by far fewer than the ones we’ve celebrated but they are memorable all the same. Possibly even more so because pain and grief have a way of making a lasting impression. The most important part is that we’ve journeyed it all together. We’ve stayed. Through it all, we’ve continued. It is harder than we dreamed but that’s what the promise is for.

28 years is not a typical milestone-worthy anniversary but in my book it is. This many years together brings with it seasons when we thought of throwing in the towel and when we wondered if we could hang on. So when we get to a place where we realize that we did hang on, it is a monumental milestone and worthy of celebration. As Willy Wonka says, “It got a little dicey there in the middle” and we’re not so naive to think that there won’t be more diceyness in our future, but this year, we celebrate. And if there are tears, they will be tears of redemptive joy.

I am thankful for our faith. I am thankful for our fun memories and adventures – and we’ve had so many! Along with our faith, our fun memories and adventures are what have given us hope through the hardships. And enduring the hardships is what has given us strength for future challenges to come. And I’m confident they will come. Such is life in our broken world.

28 years ago, Tommy and I had a version of happy in mind. Today, 28 years later, we know a different kind of happy.

And I am thankful.

There are a zillion things I’m thankful for right now but our 28 years of marriage is up at the top of the list at this moment. I am linking up this post with my friend, Kelly Smith at MrsDisciple, and a few others on the topic of #thanks. I would encourage you to go visit her post and a few others there.

What are you thankful for?

Writer+Proofreader+Traveler+Foodie+Dreamer. Let's walk and work together.
View all posts by Andrea »
← Finding Beauty on Election Day (and every day) #2016election #adayforbeauty
Songs of Thanksgiving #IAmThankful →