I need to tell you something. I’m coming to you vulnerable, emptying my heart in hopes that it will fill yours. When it (the thing I need to tell you) happened recently, I knew it was a hug from God that had to be shared. My hope is that this piece of my story that has been private for seven years of September 3rd’s will encourage you as you wait on the Lord even when He seems to be moving at a snail’s pace.

JJ Heller’s song, Braver Still, is playing as I hit “publish”. I know this is not a coincidence.

I’ve shared here on the blog a bit about the more recent discovery of my husband’s infidelity throughout our marriage. But unless you are a close friend or member of my immediate family, you wouldn’t know about my husband’s confession of infidelity in 2011 while we lived in Singapore. We kept it quiet for various reasons, some good and some maybe not so good (I wonder at times how things would have been different if I would have been more open about it then), but we mostly kept quiet to protect our children, which was what we felt was right to do.

Over the last seven years, my husband and I have spent countless hours in individual counseling and marriage counseling and participated in marriage courses with the purpose of healing our marriage from that incident and moving towards having the marriage God planned for us. At that time, the confession in Singapore was his only act of infidelity I was aware of. It was enough to break me and it nearly broke us. In the fall of 2015, we were millimeters away from calling a divorce lawyer.

But alas, we survived. And after loads of work and rebuilding trust, we jumped that hurdle and I felt like God had redeemed and restored our marriage. I felt good about where we were, I had no reason not to and had even begun speaking publicly and sharing pieces of our redemption story in hopes to encourage others.

In light of my husband’s full disclosure this year, and what I now know, it’s all insane and impossible to wrap my brain around. But I can clearly see God’s faithful covering over me through it all! Throughout the healing years from 2011 onward, God had tucked away in me so many treasures knowing I would need them for such a time as this.

Even in all of the mess of that earlier situation, God was with me. He knew what my husband had done and was continuing to do. He knew what was before, what was going on and what would come. He knew what I would need on the morning of April 4th, 2018, when His Light would burst through to crush the darkness and expose my husband’s sin. (Please understand that I’m not writing this to bash my husband and please know that I will not tolerate or acknowledge anyone who does. Ugly, unhelpful, and less than gracious comments towards me or him will be removed. I’m sharing a piece of my story, not his, so, please be kind.)

It was a Saturday morning, September 3rd, 2011 at about 3:30am. This was the day my husband confessed to one act of infidelity while in Singapore. As you can imagine, or unfortunately maybe even relate to, everything about me was stranded in time while everything around me spun out of control. After the confession and finding an inch of space from it, in an attempt to find some sort of grounding I turned to Facebook. (Don’t judge me on this. Social media to many expats is a necessary lifeline.) I pulled it up and the very first thing in my newsfeed was a simple scripture shared by a friend. Just the text. No image. No fluff. Just this:

“He is before all things, in Him all things hold together.” Colossians 1:17

If you’ve followed me here on the blog, on social media, or heard me speak, you have seen and heard me share this scripture often. At first sight of it on my Facebook feed, it immediately became and has remained my Ebenezer (an altar, a stone of help).

Throughout the course of that day, I cried, but one consistent cry was a deep and desperate prayer to God for someone to tell me I was going to be okay, that I was going to make it. I was alone in Singapore. Or I felt alone, anyway. There are several positives of living the expat life, but one, in particular, is that friendships form quickly. The negative side of that, though, is that being a transient lifestyle, it’s nearly impossible to take a relationship past the surface. I had thought often during our time there, before and after the confession, about how sad it was that I felt so alone amongst about 6 million people.

Now what I really wanted to tell you…

I did have one person in particular during that time who was a bit older than me and who had experienced infidelity in her marriage and survived it. Even though she was and continues to be an encourager and a cheerleader in my life, she was not with me in person. She wasn’t even anywhere close to me. There was a big ocean between us, in fact.

I had one other person who was with me. I could not have survived those days without her. But she was younger than me. She didn’t fit the image I envisioned, although her wisdom and counsel was, and still is, beyond her years.

I am now attending a weekly Celebrate Recovery meeting near where I live. I was out of town visiting my kids and grandkids so I attended a local meeting there. I knew no one. After the large group time, we split up into smaller groups. I went to the open share group for women. We went around the group and did the typical guided sharing. There were several new ladies there so I didn’t feel so out of place. I didn’t share much about my situation but enough for them to understand why I was there and what I was struggling with at the time.

We got to the end of our meeting time and the lady who was facilitating our group began the prayer time. A few ladies prayed and then she finished it up. Her prayers were beautiful and heartfelt.

I kid you not!

She was older than me.

Seven years of tears of release and relief poured down my face throughout her prayer. I asked God why it took Him seven years to answer my prayer.

“Lord”, I said, “Why did I have to wait this long?” and the Lord replied, “I have confined you in time but you cannot confine me in time. Trust me.” (tweet this)

It’s not lost on me that I waited seven years for this moment and that seven is the biblical number of completion. While my healing is ongoing, God is ever faithful to give me what I need right when I need it.

Waiting on the Lord is not easy but when we do, we will see that His timing really is perfect and that in the waiting, He was holding all things together. 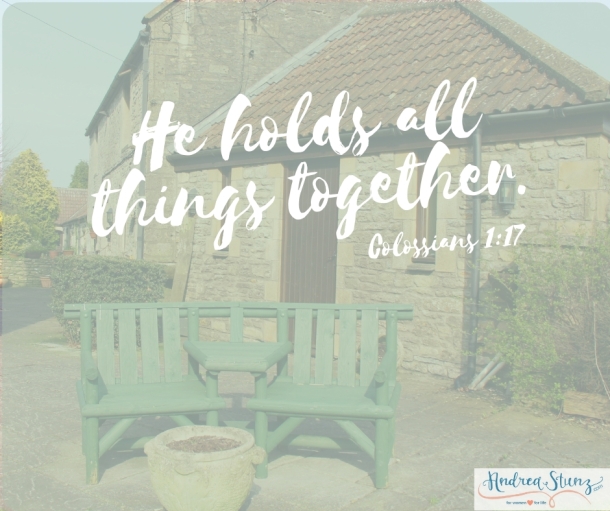 Sojourner, supporter, sister. Walking intentionally to hope - together.
View all posts by Andrea »
← Seven Songs to Remind Me Who I Am
Bridging Transitions – Part Seven {In Loss} →