RSS Feed
← How Courage Opens Up the Way for Miracles {A Guest Post by Sue Domingos)
How can I know my spouse loves me? →

I’m currently 51 years old. I have chewed my nails and ravaged my cuticles, often to the point of bleeding and infection, since I can remember. (I’m most definitely not proud of this but I know I’m not alone and I want the reader out there who gets this to know she/he is not alone either.)

I don’t have a memory of any period in my life when I wasn’t biting my nails, except one and I’ll mention that in a bit. I’ve tried everything over the years to stop. Gloves, band-aids on every finger, vaseline, stuff that tastes horrible, all sorts of cuticle oils, nail polish, and even prayer for God to make me stop. All of this time, I’ve racked my brain trying to figure out why I did this to myself. I hated it. I hated the pain and I hated the shame. I hated having to constantly hide my hands in photos and being embarrassed to hold someone’s hand.

The only thing that ever helped was having acrylic nails which I’ve done most of my adult life. It was a mask – physically and emotionally. As soon as a nail started lifting, I would begin picking them off. Then, let the chewing and wrecking commence. I remember going into nail salons with painful nubs asking them to put a full set on. I knew it was going to hurt like crazy. Sometimes I asked them to please be careful and other times I took it as punishment I thought I deserved. It was so shameful to expose myself in that way but I had to because I knew I would continue to make them worse. The last time I remember growing out my nails was for my wedding 30 years ago. I’m certain I chewed them off within hours after I said, “I do”.

In all the healing work I’ve been doing this past year and having a counselor who is trained in trauma therapy, we dug into the nail-biting matter and discovered that it was basically a self-injury issue, or referred emotional pain. I realized that since I was a young child, I have been highly sensitive to everything, especially emotional pain and, without blame-shifting, no one was able to see that in me or help me through it. 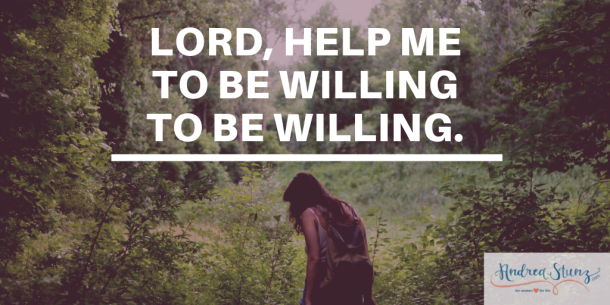 So, I did. I started praying that prayer daily and often in the fall of last year. In January, I was headed to Hong Kong to visit a friend and I noticed three fingers on my right hand had a little bit of fingernail growth. Minor, but I took note. Then I noticed that throughout that trip I had no desire to bite them off as I normally would have. Typically, on a long plane ride, I would have mutilated my nail beds and cuticles if I didn’t have acrylic nails on. But there was no desire to chew. By the end of that two-week trip, I had all five nails on my right hand, short as they were. By the end of January, I had fingernails on all ten fingers. And they have stayed!

I have ZERO desire to bite my nails. I still struggle a little with picking on my cuticles but I have cuticle clippers within reach everywhere I go. It’s so bizarre! After probably 45 years or so of being tormented by this horrid habit, it’s gone! I got my first manicure last month that didn’t include a full set or a refill and I no longer have to hide my hands.

I’m so thrilled to have fingernails that are pretty and that I can have fun with and paint whenever I want to! I’ve actually had to cut them down a few times because they were too long. I laugh with joy and thank God for His healing every single time!

This is a picture of my Color Street rep when the spinning wheel of joy landed on MY name! I recently won a drawing and got a very large supply of free Color Street nail sets. I mean very large! I felt like God swooped down and hugged me big and said to me, “Andrea!! I knew we could do it!” I’m really looking forward to adding some Color Street fun to my life! A lot of it, haha! This isn’t a post to push anything but if you’re interested in joining me in some Color Street fun, check out this link. I put my first set on today and while I didn’t do a super great job, I have nails!!!

A stumbling pilgrim and gatherer and sharer of stories. Let's walk intentionally to hope.
View all posts by Andrea »
← How Courage Opens Up the Way for Miracles {A Guest Post by Sue Domingos)
How can I know my spouse loves me? →